Some months back we got a nice email from a guy thanking us for RAD, the FM/Adlib tracker we made back in 1995. Realising that there were quite a few people out there still using it, we thought it about time we released a new version - 23 years later! 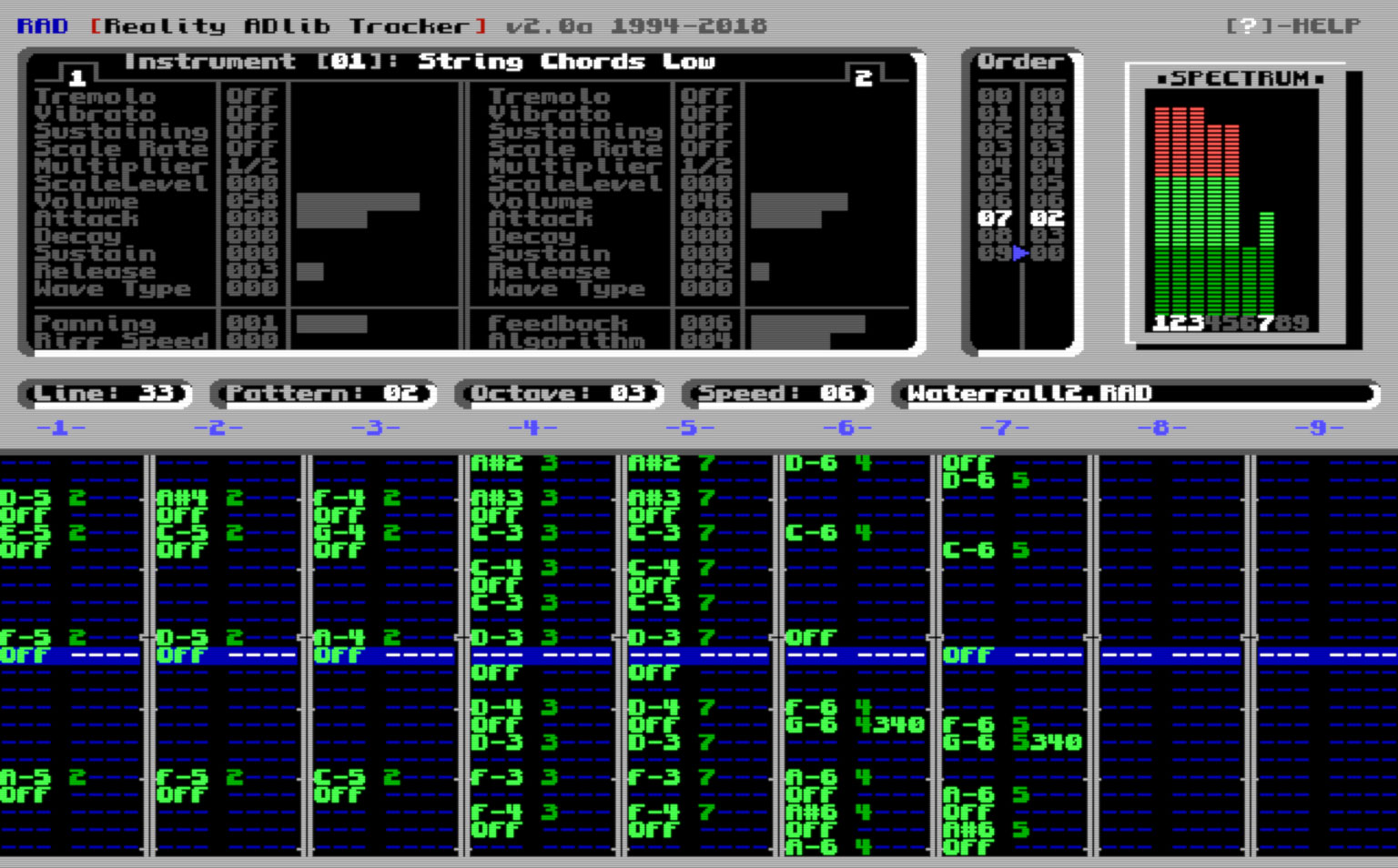 Why? Well originally, back in 1995, the reason for RAD's existence was due to the lack of decent Adlib trackers around. When we wanted to put some nice FM tunes into our productions we just couldn't find a suitable format that was small enough and came with player source-code to enable easily integration of the tune into our intros. And so we wrote our own...

Fast forward to 2017, and we'd noticed RAD had gained somewhat of a small cult following. However, one of the main criticisms of RAD was that it didn't support the later Yamaha FM chip, the OPL3, and so was stuck in 2-operator mono hell. So we set out to give RAD a long overdue update to give it that OPL3 sparkle.

Us being a demo-group player code is, of course, included, and what's more includes an accurate emulation of the OPL3 chip for those of you that no longer have an OPL3-based soundcard in your PC. And those of you on Macs that never got to experience the joys of Adlib music, well, we now have a Mac version of RAD too!

BTW, if you're not familiar with the term "Adlib", this was a company that originally popularised the Yamaha OPL2 FM sound back in the early 90s and it was common for gaming PCs to come with these installed. Though sound cards by other companies (e.g. Creative) later added sample support and upgraded to the Yamaha OPL3 chip, the FM synthesis parts were nonetheless billed as "Adlib-compatible". The Adlib company is now long gone but their name is still used to this day to refer to old-school FM synthesis on the PC. RAD came out when the original Adlib cards were still popular, hence the name.

What Does It Do?

RAD, as with all old-school trackers, is a program that allows you to author musical arrangements. It was based more-or-less on Protracker (on the Amiga) which is the model that most music trackers seem to be based on.

Tracker tunes are made up of three main components:

Essentially your patterns will hold the notes of your tune, where each note is played using an Instrument, has various Effects applied to them, and are pieced together into an Order List that orders the play-back of your patterns.

RAD 2 has the following features:

Help is included within the program, but to learn more about the Reality Adlib Tracker and how it works you can also find the instructions here...

Please note that this file does NOT contain a virus as may be reported by Windows 10. This is something to do with the way we compiled/packaged the program - It’s completely safe.

You can download all versions of RAD, including Reality’s demoscene and music releases from our public file system.

You can download Reality’s demoscene and music releases, including all versions of the Reality Adlib Tracker and our collection of RAD songs from our public file system.